Last week, the entire Search Media Department at Slingshot SEO attended Blog Indiana – a social media and blogging conference held August 9-10 at the University of Indianapolis. The organizers instituted a “people tagging” system wherein attendees were asked to wear pins that spoke to their area of expertise and interest (e.g. SEO, podcasts, web apps, art, food, etc.). With so many new attendees at Blog Indiana this year, the noobie pins were a hot commodity. I’m still salty I never got one, as there are plenty of reasons that I should have.

While reflecting this weekend on the two days I spent at Blog Indiana, I tweeted to my new followers that I had no idea choosing sessions at #BIN2012 would result in the same kind of remorse I feel in creating a schedule for any of the numerous music festivals I attend every summer.

Admittedly, this was a rookie mistake.

Outside of my daily responsibilities at Slingshot SEO, I am the music editor at IndyMojo.com. When reporting on a festival, it’s my job to attend the best performances of the weekend and recount the live experience to those who can’t be there. Sometimes this means making heartbreaking decisions, like when My Morning Jacket, DJ Bonobo and Girl Talk played simultaneously at Forecastle Festival in Louisville last month. (Side note: I choose Girl Talk)

I felt that same sensation of wanting to be in three places at once during Blog Indiana, particularly during the 10:45 a.m. breakout session on Friday morning. Presented with the following options, I struggled to make a decision on which to attend:

I ultimately chose to learn about stepping up my LinkedIn game, as I felt it was the area in which I could use the most help.

A light bulb moment occurred when I realized why I’m not as active with my LinkedIn profile as I am with other social platforms. “It’s boring!” shouted Reynolds during his presentation. “There are no cats playing pianos on LinkedIn!” He showed me new ways to utilize my LinkedIn account: give recommendations, share your Amazon reading list, conduct surveys, join and interact with groups, participate in the “Answers” section. He presented them all as different ways to grow my professional network and make new connections- maybe not as hilarious as cat videos, but it is a fresh perspective that’s already boosted involvement with my account.

Curious about what was going on in the other two rooms, I checked the #BIN2012 hashtag on Twitter for live tweets and found this from a fellow co-worker: 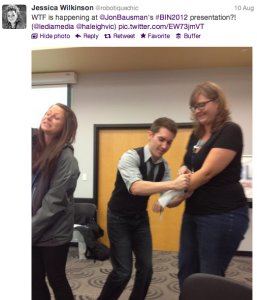 Great, I thought to myself. I missed what’s sure to be one of the most talked about sessions at Blog Indiana.

As it turns out, Bausman utilized two fellow Slingshotters to demonstrate that people like people. And that people trust the opinions of the people they like. You wouldn’t know it by the looks on their faces, but by the end of the hour, both ladies endorsed the products Bausman asked them to wear at the beginning of the session- essentially proving the presentation’s underlying theme: anybody can be an influencer, as long as they’re able to genuinely engage with their audience.

As an employee of an SEO company with a new vision to fix marketing, I was also very curious about what was unfolding in Douglass Karr’s prezi (that’s a “presentation”for those of you not hip with the blogger lingo; don’t worry, I didn’t get that memo in advance, either). Karr’s teachings echoed those of our morning keynote speaker Jay Baer, who advocated becoming a you-tility to your company’s customers. “If you are useful, your customers will do your marketing for you [because] they will keep you close [in their social media feeds],” said Baer. Karr was more technical, declaring that “SEO is no longer a math problem; it is now a human problem.” In order for brands to see better success in search results, various forms of PR and inbound marketing tactics are required-  not just link building with guest posts anymore. Interesting content, placement, and promotion on social is key now.

What I learned: Headlines (a.k.a. article titles) should not be a summary of the article’s substance. Always write your headline first, so that it informs the content of the post. Your headline should be “a retelling of the truth that’s too sweet to be a lie”.

What I learned: It’s okay to turn off your filter and let your self-editor rest. Don’t try to be a genius; just learn to share your story and the way you see things- even if your viewpoint may not please 100 percent of your audience.

What I learned: A brand is a company’s promise that sets a customer’s expectations for the experience they will receive by engaging with that brand. These expectations can also chain you to certain behaviors, necessitating the need for separation… no matter how much you love your company.

What I learned: Legally speaking, Pinterest is safe… sort of. If you’re a standard user pinning your own content or repining others’ content, you’re fine. If you’re pinning from external sources regularly, you’re slightly on the radar. If you’re a brand pinning, you’re always on the radar. Read those terms of service!

What I learned: 98 percent of people trust the advice and information they receive from blogs, but creating great content alone is not enough. You have to promote it by putting it into the hands of influencers through genuine, mutually beneficial engagement. 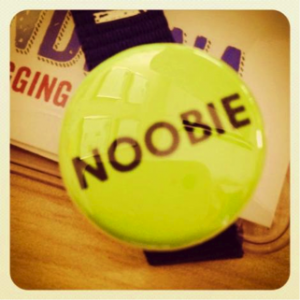 Over the last four years of my music journalism career, I’ve attended major festivals in states as far away as West Virginia and Arkansas, but always relish the benefits of Indy Mojo’s hometown festival, Mojostock (disclaimer: I’m their music editor). As a noobie at Blog Indiana, I couldn’t help but draw parallels in the advantages of both events’ smallness. 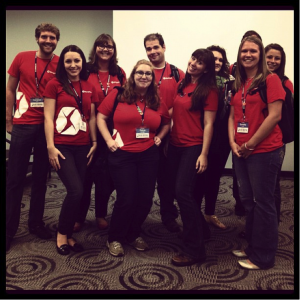 Attending Blog Indiana felt equally as much about Indianapolis’ culture as it did about blogging and social media. In other words, if you have a business or a personal brand and live in Indiana, you can benefit from attending Blog Indiana. I failed to recognize this early on, but it gets me excited to think about Blog Indiana 2013 when I won’t be so green. I’ll go back having formed deeper relationships with the new contacts I made this year. I’ll step up my pre-BIN Twitter networking to take better advantage of the precious interaction time between breakout sessions. I’ll figure out how the live-Tweeters are so nimble and precise while still paying attention to their presenter.

And most importantly I’ll have better comebacks prepared for the continuous ribbing about my red shirt that matches all of my co-workers.

Special thanks to The Glitter Guild (Holly, Jessica, and Kristine) for helping me fill in the gaps at Friday’s 10:45 a.m. block of presentations.