I like to believe that BING is a recursive acronym meaning “Bing Is Not Google.”  Since its inception in 2009, Bing has set out to rival Google as a “results engine,” even going so far as being accused of copying Google’s results. 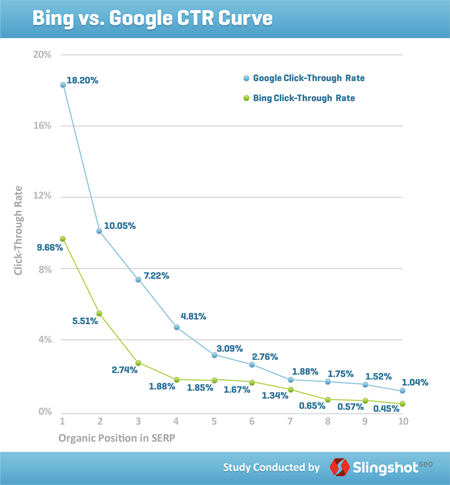 Bing started out as just an annoying Kimmy Gibbler to Google’s Full House, but fast-forward to 2011.  Bing has acquired a 10-year license to be Yahoo!’s exclusive search platform and now holds 30.5% of the overall search market share.

Bing has become a dominant player in the search industry and has caught the attention of millions of search engine users with their superfluous advertising campaign.  But even from the beginning, SEOs have wanted to know more about Bing and how it differs from Google’s ranking factors, search results, and users.  The folks here at Slingshot SEO are just as curious.

Our Research & Development Team examined user search behavior in the form of two click-through rate studies – one for Google and one for Bing.  We looked at over 300 keywords in each study and used actual client data from Google Analytics.  The studies are now available as a white paper. Download the whitepaper now>>

Click-through rate (CTR) studies on search engines are some of the best metrics to measure user engagement on the Internet.  The studies are outlined below.  Our findings may surprise you.

If you have the tools available, click-through rate studies are relatively simple to orchestrate.  The goal is to find enough keywords to have an accurate CTR curve that you can use to help estimate traffic to your website.

We’ve outlined our research process to make it as transparent as possible, so the reader may see how we calculated our results.

We use a tool called Authority Labs to track the daily positions in SERPS of over 10,500 keywords , which allows us to identify keywords with stable positions for 30 days.

To find the number of U.S. searches for a certain keyword, we must look at the Webmaster tools for Google and Bing.  Google provides a Keyword Tool that features U.S. searches broken down by month, which can be accessed by downloading the .csv file within the interface.  Bing provides an Advertising Intelligence Excel plug-in, which breaks down the number of U.S. searches by day.  Both are widely used by marketers and SEOs, and are the most accurate tools freely available for search volumes.

Next, we find the actual number of visits from Google Analytics while making sure to specify organic, U.S. results for each respective keyword and search engine.

For each study, we calculated click-through rates on over 300 keywords (~30 in each position #1-10).  The table below shows the average CTR for each position.

Our R&D team was surprised to see click-through rates significantly lower for Bing, especially since both studies were conducted using data over the same time period (January 2011 – July 2011), had 108 keywords in common, and used the same group of 91 clients.

If so few users are clicking on Bing organic results after a search, where are they going? Possibilities include “related searches” on the sidebar, re-queries, page two, one of the tabs at the top, a paid result, or the images, videos, news, shopping, and local listings results within the SERP.

Does this mean that Google’s results are more reliable?  There is plenty of heated debate over this issue, but whether or not Bing users actually abandon their searches more doesn’t necessarily mean that Google’s results are more reliable; it may just be a behavioral issue.  This is an implication from comparing the CTR curves, but we must first acknowledge that the demographic of users for each search engine is very different.

Specifically optimizing for Bing is still important, especially since the demographic of users is different.  Hit-wise carried out a study, which showed that 58% of Bing users were female, whereas only 45% of Google users were female. It was also found that most Bing users were the age of 35 or older.  This is incredibly valuable information for marketers because it affects the target audience.  If you have a product geared towards females or an older group, Bing may be more valuable to you.

The key takeaways from the two studies are: