Considering the upcoming presidential election, it seems appropriate to draw some similarities between the United States’ complicated Electoral College process and how Google chooses which sites win that No. 1 spot.

If you need a brief political science refresher, presidents are elected based on an indirect vote by the population. When an individual casts a vote, it’s a sign to their state’s Electoral College representatives that they want to vote for that candidate. Remember the controversy with the 2000 elections, when Al Gore won more popular votes, but George Bush won the actual election? The Electoral College is what made that discrepancy possible.

To get a good comparison, let’s start with the overall principle of the connections between the election and website search engine rankings. We can draw out the following similarities: 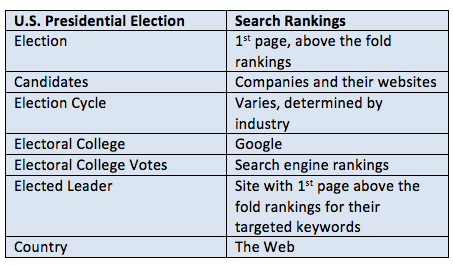 Baseline Similarities Between the Election
and Website Search Engine Rankings

The list above does not define citizens, citizens’ votes or even voter fraud. To define the citizens, their votes and voter fraud, we’ll break the timeline of the Internet into two epochs and then define each within the separate epochs. The two eras are Pre-Social Media and Post-Social Media.

In the Pre-Social Media Era, the citizens were few. They were mainly tech-savvy companies and entrepreneurs who were early adopters. All other things the same (visitor site interaction metrics), links were the citizens’ votes. Citizens voted naturally be talking about something online and then linking to (or casting their vote on) the relevance of another citizen’s content. The citizens who link out to other sites are sometimes referred to as the Linkerati.

Google came along with an idea to create a search engine that would return results across the Internet using a newer algorithm than the ones already in use by other search engines. Understanding that their clients were in control of the search results, Google had to come up with a way to rank results that satisfied their clients. Google used links as a form of voting to help return relevant search results. Links were a form of voting that few could cast. Spammers entered the scene during this era. Tech-savvy spammers could game links across the Internet to influence search (voter fraud). And so, the battle to eliminate spam from search results began, and rages on today. As time progressed, Google needed more data than just links to return relevant results.

“The few” in this era seems nearly all encompassing. What company doesn’t own a website today, right? However, Google still understands that just because their clients have access to the Web doesn’t mean they have a website or even a virtual presence. And while their clients may be able to cast a vote using a link without a website in some creative ways, this doesn’t mean that their clients are voting or fully weighing in on their idea of digital relevance.

Enter the Post-Social Media Era. The citizens are no longer the few. The citizens’ votes are no longer links. When this switch happened, Google realized they were only capturing the votes of the few and not the votes of the many, which includes potentially all of Google’s clients. This new social media phenomenon captured people’s true opinions on the digital relevance of deserving brands. Each social network includes its own voting system, just like an election. Each network also has to control spam (or voter fraud) at their own level, or they too lose clients. Social media, while not completely foolproof, is much harder to game.

This was a key moment in search history. No longer was Google limited to measuring a company, and therefore their potential search engine ranking, based on the antiquated method of company-controlled, potentially manipulated media and public relations. In a Post-Social Media Era, the citizens are the many, comprised of both the Linkerati and the Socialrati. Google can see voting results from all of their clients (anyone with access to the Web, Google and a social media account). Now, citizens’ votes are a combination of links and social media signals from key social networks. Danny Sullivan and Matt Cutts acknowledged this in their conversation at SMX 2012. The inclusion of social signals as part of the voting system lays the groundwork for AuthorRank to begin playing a key role as a trust factor in website search engine rankings.

Tying It All Together

Similarities Between the Election and Website Search Engine Rankings, Pre and Post-Social Media

Social Media is more important to Google in this era of the Web. What does all this mean for you? This means you now have the power to cast your vote in the elections of your interests. Any topic that interests you is a potential election. Every single search engine first page above the fold result has been elected there by the citizens’ votes and the vote of Google, the Electoral College of the Web. The power is no longer in the hands of the few. The power is now in the hands of the many. If you are reading this and have access to the Web, access to Google, and have a social media account, you are one of the many. You have the power. Cast your vote!