Believe it or not, content marketing has been around since 1895, according to Joe Pulizzi, founder of the Content Marketing Institute. John Deere launched a magazine called The Furrow with the intent of educating farmers on the technology changes occurring at the turn of the century. This publication still exists today. 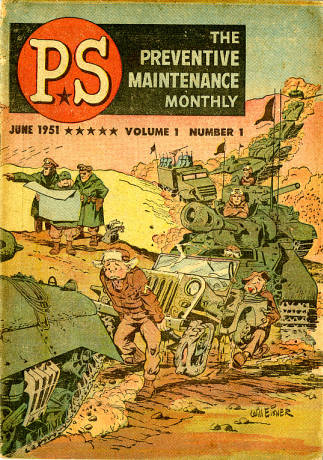 John Deere didn’t hold a monopoly on content marketing over the years either. Recognizing the power of entertaining and/or problem-solving content, the US Army developed Army Motors and The Ordnance Sergeant magazine during WWII.

These monthly publications evolved into PS Magazine (The Preventative Maintenance Monthly), which was first published during the Korean War in June of 1951.

Through the use of comic book style cartoons, the magazine was intended to communicate to soldiers the important takeaways from the many technical manuals and bulletins the Army produced.

The public affairs people in the Army figured out that pretty girls and humor could drive content consumption, as opposed to dry technical manuals. It is distributed to this day.

The above are historic examples of enterprise-level content marketing campaigns with three major attributes in common—they both represent one-way storytelling, siloed campaigning and a creative-centric approach. This adequately describes most forms of marketing-purposed content until the 1990s when mass acceptance and adoption of the Internet occurred.

One-way storytelling lacks real-time feedback or significant, meaningful user-generated content. It doesn’t resemble a conversation, significantly build robust communities or create complex connections and communication between people, groups and brands. It’s simply a brand communicating a message as it sees fit hoping its audience will consume it and come back for more.

The mass adoption of the Internet didn’t immediately change one-way story telling in marketing. Traditional marketers and geeks ruled this space throughout the ‘90s. Neither of which could envision the connectedness or information flow that exists today. However, the deployment of forums, quasi social media platforms, blogs, and more recently, smart phones, began to shed light on new ways to use content in marketing.

It took 116 years for a powerful enough information infrastructure to be built and for enough people to be connected in a robust enough fashion for content marketing to evolve from one-way storytelling to dynamic storytelling.

This means that the enterprise can unsilo its campaigns, move from a creative focus to a content focus, promote meaningful conversations, build robust brand communities and nurture new complex connections and communication between people, groups and brands.

In August of 2011, Coca-Cola announced a new bold and groundbreaking marketing initiative they call Content 2020. Its goal is to help sculpt popular culture so to earn a disproportionate share of it by creating ideas that are so contagious they can’t be controlled.

No blog post can adequately present the details of this groundbreaking initiative as well as the two videos produced by Coke below. While they are seven and 10+ minutes respectively, they are well worth the watch.

Coca-Cola is the first to launch such a robust and dynamic content marketing plan enterprise-wide. The plan recognizes that content should power every aspect of a brand, and the ideas it delivers can sculpt popular culture and create brand significance. Content takes center stage.

For most enterprise companies, content has a seat in the nose-bleed section and is almost exclusively one-way storytelling. If a brand doesn’t appropriately nurture popular culture by telling its own story, popular culture will tell its own version of the story.