During the last 26 years of my business career, I was closely associated with the non-profit world.   Within that environment there exists several well-known governing bodies and associations, and I had the privilege to serve on the boards of most of those groups. 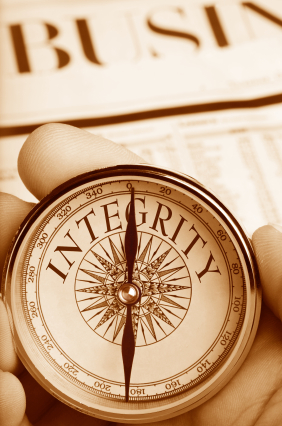 I chose to continue serving on one particular board because the work was near and dear to my heart.   As I type this, I am sitting at the Toronto Pearson International Airport after a daylong board meeting with the Ethics Committee of the Association of Fundraising Professionals.

Now my board tenure with the ethics committee is moving into a second term. During previous years, my involvement included sitting in on legal hearings regarding ethics cases. In nearly every case, the defendant had crossed the line of ethical behavior in some manner, usually for financial gain.   I wish I could share a few of the details, some of which could have made it on the Jerry Springer show!

So why is the area of ethics so important to me? Perhaps it’s because I have witnessed so many potential ethical situations arise and then watched as my mentors adroitly handled them. In nearly every case, the leader rose above the fray and did what was right. Don’t we wish the executives and officials at Enron or those selling sub-prime mortgages operated in the same manner? (By the way, if you haven’t read Michael Lewis’s “The Big Short”  already, I highly suggest you do so in order to gain perspective on our country’s financial crisis.) Please allow me to shout kudos to those leaders who do take the high road every time.

Let’s back up a minute and dig deeper into business ethics. I often equate ethical dilemmas to shortcuts encroaching upon normal business practices. For example, should we recognize this bit of revenue in order to make our quarterly or annual projections? This is often a question that arises. We all know how hard such ethical decisions can be when large bonuses or even the continued rise of an important career are at stake. If only there was a working crystal ball to reveal the long-term implications of such decisions. Gazing into the crystal ball and seeing the wrong turns unravel in sometimes disastrous ways might influence many ethical actions. One could only hope!

How does this apply to the high tech world?

The world of high tech companies is often venturing into uncharted waters where precedents may be few in number. Rather than exploring the ins and outs of any portion of the tech world, I will focus on three universal elements: the ethical treatment of customers, partners and staff.

After participating in and leading the aforementioned ethical hearings, my summation can be boiled down to three key words:

I’ll dig just a bit deeper and explain how keeping these watchwords in mind can help guide daily actions as you interact with employees, partners and customers. When grey areas exist or when withholding some aspect of information is easier, being truly honest always keeps one of the proper sides of ethical behavior.

Let’s begin with the bedrock of ethics.

Whether it is a customer, partner or employee (or team member as we refer to them at Slingshot SEO), honesty is deeply appreciated in every interaction. It is especially helpful when relaying negative news.  It would be difficult for me to count the number of times people thanked me for being totally frank and honest, no matter the subject matter. Best of all, some of the toughest situations with all three groups turned into long-term, high-quality relationships.

This seems to be the most obvious of the three watchwords. However, we know that the Internet has blurred many areas. Regulations that were easy to apply to brick and mortar stores in areas such as sales tax seemed to be ignored by people buying over the web. Those precedents are being more firmly established each month and will truly make such decisions easier. Though the next new technological revolution will probably alter the landscape once again and blur our vision, let’s hope ethical behavior will prevail.

Lastly, just doing what is right is my way of wrapping up and covering all of the bases. In certain cases, when laws or regulations are not in place, our judgment must be the guiding light. I have always found that doing what is right never fails me. If one thinks about being on the other side of the desk or contract, ensuring that it feels “right” from both views, then ethical behaviors prevail.

Part of the reason I accepted the role of CEO for Slingshot SEO was due to the extremely high ethical standards described by our founders. We all agreed that compromising ethics would, in the long run, compromise the future success of our business.

This steadfastness to high ethical standards is part of the reason we have such outstanding customers, partners and team members. I personally believe it is a key part of the foundation we continue to build in order to grow one of the finest tech companies in the country.