In this age of technology, cheating has never been easier. 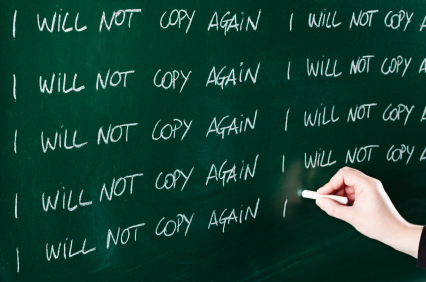 No, I’m not talking about cheating on your better half. That’s an entirely different story that – as we would say here at Slingshot – doesn’t fit into our RELEVANCY standards for this particular blog.

OK. Back to this cheating thing. Here are the scenarios I’m talking about:

It’s considered “cut-and-paste” plagiarism or duplicate content — stuff that could potentially cause your site to be penalized by search engines. If you have multiple people regularly populating your site with fresh relevant content — which you should — it makes sense to review your policy on this practice, if you already haven’t.

Apparently, this type of plagiarism is not only rampant; it appears many people are becoming immune to the illegitimacy of the practice.

In a study by the Donald McCabe Center for Academic Integrity, a majority of students (68 percent) didn’t think it was a serious issue. Education Week revealed 66 percent of college students admitted to plagiarizing by pulling content from the Internet.

And according to the U.S. News and World Report, 80 percent of so-called “high-achieving” high school students admitted to cheating in a survey, while 51 percent of high school students didn’t think there was anything wrong with it. A vast majority — a whopping 95 percent — said they had not been caught. College students didn’t fare any better in their attitudes: Nearly 85 percent said it was necessary to get ahead.

With these many incidences, it isn’t a stretch to assume that an employee (or you) could be taking a shortcut every once in a while when producing content for your site. It’s also possible that you’re not guilty of plagiarism, but have very similar content on different pages of your site – which is all the same in the eyes of search engine bots. Duplicate content serves no purpose … it will do nothing to assist in your efforts to boost your SEO ranking.

In more egregious cases — let’s say you pulled 10 percent of a Wikipedia entry to craft your content—your site actually could catch Google’s attention and be penalized as a result.

To ensure your company’s practices against plagiarism is intact, take the following steps.